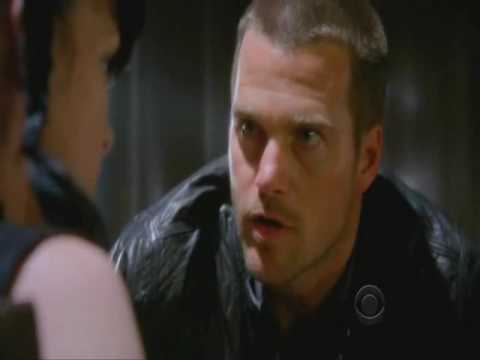 Grisha Alexandrovich Nikolaev or G. Callen (G. or Callen to his NCIS colleagues) is an NCIS Special Agent and also a member of the Office of Special Projects in Los Angeles as well as the lead agent of the OSP field team and partner with fellow NCIS Special Agent, Sam Hanna. Grisha "G." Callen is a fictional character in the show NCIS: Los Angeles portrayed by Chris O'Donnell. He is an NCIS Special Agent in Charge, and the senior agent assigned to the Office of Special Projects. He first appeared in the NCIS season six episode "Legend ". Callen can pull off a casual style in the office, but he really shines in the field—especially undercover. Whether wearing a dapper tux, full firefighter gear, or even changing it up with a beard, we love the many looks of Callen. Check out some of this G's finest. Chris O'Donnell, Actor: Batman & Robin. Christopher Eugene O'Donnell was born on June 26th, in Winnetka, Illinois, to Julie Ann (Rohs) and William Charles O'Donnell, Sr., who managed a CBS radio station, WBBM-AM. He is the youngest child in his family, with four sisters and two brothers. His father had Irish ancestry and his mother's lineage includes German, English, and Swiss. G. Callen (birthname Grisha Aleksandrovich Nikolaev) (Chris O'Donnell) is the Lead Senior Field Agent and undercover operative attached to the NCIS Office of Special Projects. He speaks several languages fluently, including Russian, German, and French. Callen is a highly skilled field agent having worked numerous overseas undercover assignments.

A series of flashbacks in the season four opening episode "Endgame" reveal that Janvier's death was faked.

After Janvier and Callen are traded back to their respective sides in a prisoner exchange, Callen—following his fake suspension—returns to lead the OSP team once again.

Janvier returns again at the end of season 4. In the season 5 opener, Janvier reminds Callen that he will be seeking his revenge, even if he has to wait many years to exact it.

In the season five episode " Reznikov, N. Reinhardt claims that his true name is Nikita Alexsandr Reznikov and that he is Callen's father.

He is kidnapped and killed by one of the surviving members of the Comescu family, Vasile. At the end of the episode, Hetty and Arkady Kolcheck explain to Callen that the real Reznikov was a KGB major who was arrested and sent to a Soviet gulag in , around the time Callen and his sister came to America.

Reinhardt actually named Hans Schreiber was a former East German who owed Reznikov a favor and repaid it by keeping track of Callen and his sister.

The Comescus mistook him for Reznikov, who kept up the ruse to protect Callen. Hetty gave it to Callen. In "War Cries", Sam, Michelle, and Hetty set Callen up on a blind date with Joelle Taylor, a friend of the Hannas and their daughter's former kindergarten teacher.

Both aware of the trick, they nevertheless get on well although Callen immediately makes up a fake career to protect his role.

Throughout season five, Joelle is mentioned as Callen's girlfriend. In "Humbug", an armed robber threatens Joelle in public after stealing some malware from a defense contractor.

When it is learned that the robber placed the stolen malware on Joelle, Callen is forced to put himself in danger to protect her, eventually being forced to reveal to her that he is an NCIS agent.

Although she appears hurt by this revelation of Callen's deception, she eventually accepts to continue their relationship as long as he tells her more about himself.

Callen and Joelle are confirmed to be still together by both Sam and Callen himself. Callen later tells the team he would not be against starting a family with Joelle.

Callen realises Arkady Kolchek knows more about his father than he's revealed. When a mission to find a ship with stolen barrels of oil leads to Russia, Arkady accompanies the team.

Whilst there, Arkady takes Callen to a coffee shop and shows him a photo of Callen's father Reznikov from the s, long after he was supposedly sent to the Gulag.

Through Eric's hacking, Hetty discovers that Reznikov took the name of Chernoff. Callen realises he was working in Moscow at the same time his father frequented the city.

In season seven, Callen admits that he and Joelle are fighting a lot. They break up off screen but still spend Christmas together to avoid being lonely.

In "Matryoshka, Part 2", Callen meets Reznikov in Russia. He reveals that Callen's birth name is Grisha Aleksandrovich Nikolaev, but has to leave before he could find out any more information.

Callen has since updated his personnel records and credentials with his full name. Callen reunites with Reznikov in "Glasnost", where he shoots a man who went after a woman victim he was visiting and reveals he had been in touch with Arkady Kolcheck since the Russia incident back in Season Seven.

Callen interrogates his father, who admits he's in LA for work—not to see his son. After Hetty takes over the interrogation, she allows Reznikov to escape to finish what he started.

Callen and Sam go to his rescue, and Callen discovers that Reznikov helped a woman move to the U. That child has since become a parent, so Callen has a half-sister and is now an uncle.

In the episode "Payback", Callen learns from Hetty that Joelle is an undercover CIA agent who has been assigned by rogue agency moles to spy on him.

This article has multiple issues. Please help improve it or discuss these issues on the talk page. Learn how and when to remove these template messages.

This article describes a work or element of fiction in a primarily in-universe style. Please help rewrite it to explain the fiction more clearly and provide non-fictional perspective.

April Learn how and when to remove this template message. This article relies too much on references to primary sources.

If you would like to participate, please visit the project page where you can join the discussion. To improve this article, please refer to the style guidelines for the type of work.

This article has been rated as Low-importance on the project's importance scale.